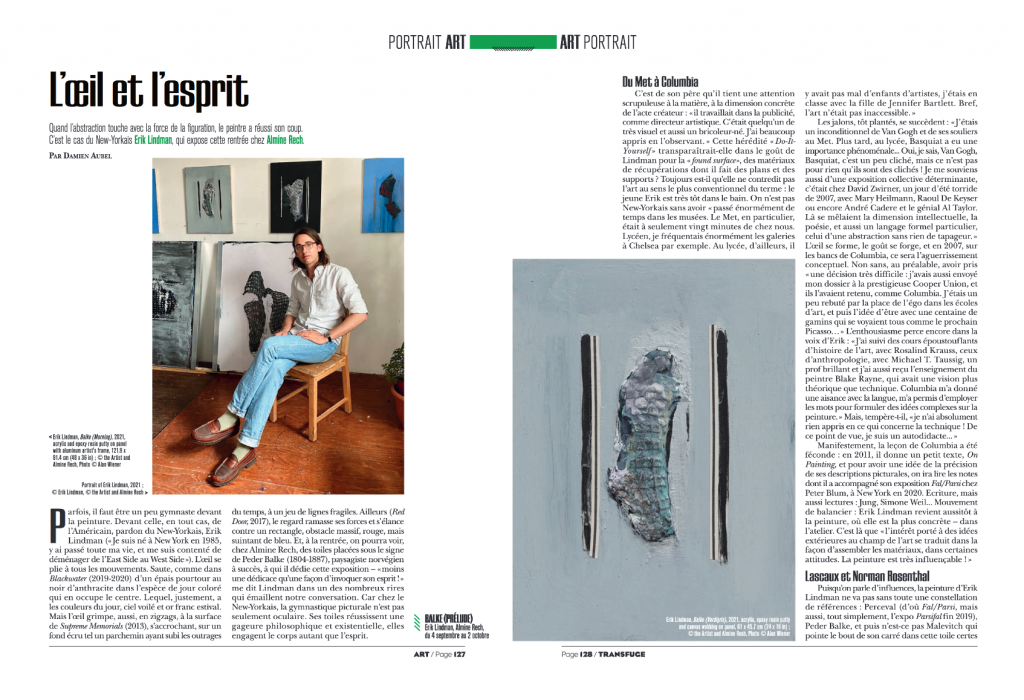 The following profile was written on occasion of the show “Balke (Prélude)” at Almine Rech, Paris in 2021.

Click here to see the translated print spread in the magazine.

The Eye and the Mind

When abstraction moves the viewer with the forcefulness of figuration, a painter has succeeded. Which is very much the case with New-Yorker Erik Lindman, who will be showing his work this fall at Almine Rech. By Damien Aubel

Sometimes, you need to be a bit of a gymnast to admire paintings. You certainly do with those of American—sorry, New Yorker – Erik Lindman (“I was born in New York City in 1985; I’ve always lived here, all I did was move from the East Side to the West Side”). The eye must twist and turn with all their movements. Or jump, as in Blackwater (2019-2020), from a thick charcoal-black rim into the kind of colorful daylight that occupies the middle. Truly daytime colors: hazy sky and pure summer gold. But the eye also zigzags up the surface of Supreme Memorials (2018), and clings to a set of fragile lines against a weathered, parchment-like off-white background. Elsewhere (Red Door, 2017), the gaze garners its strength and flies against a massive rectangular obstacle, all red, but oozing blue. This fall, Almine Rech will be showing a series of paintings placed under the sign of Peder Balke (1804-1887), a successful Norwegian landscape painter, to whom the show is dedicated – “it’s less of a dedication than an invocation of his spirit!” says Lindman with one of the many laughs that pepper our conversation. For the New York artist, pictorial gymnastics is not just for the eye: his paintings rise to a philosophical and existential challenge in that they engage the body as much as the mind.

From the Met to Columbia

From his father, he took his careful attention to materials, to the creative act’s concrete dimension: “he worked in advertising, as an art director. He was a very visual person, and a born handyman. I learned a lot from watching him.” Could this “DIY” heritage have trickled down into Lindman’s taste for “found surfaces”, salvaged materials he uses to make media and supports? Still, nothing in that contradicts art in the most conventional sense: Erik was bathed in it from an early age. You’re not a true New Yorker if you don’t “spend a lot of time in museums. The Met, in fact, was only twenty minutes from our house. As a high school student, I used to hang out in galleries around Chelsea, for instance. In my high school, there were actually quite a few artists’ kids: I was in class with Jennifer Bartlett’s daughter. So you see, art was not inaccessible.”

After this early start, he went from one milestone to the next: “I was a big fan of Van Gogh, his Shoes at the Met. Later, when in high school, Basquiat was a tremendous influence… Yeah, I know, Van Gogh, Basquiat, it’s all a bit cliché, but they deserve to be clichés! I also remember a decisive collective show, at David Zwirner’s, on a scorching summer day in 2007: there was Mary Heilmann, Raoul De Keyser, André Cadere and genius Al Taylor. It was a blend of the intellectual dimension, of poetry, and also of a particular formal language—abstraction—with nothing flashy.” His eye was trained, his taste was forged, and in 2007, on the benches at Columbia, he engaged with the conceptual. This came after “a very tough choice: I had also applied for the prestigious Cooper Union, and they had accepted me, as had Columbia. I was a little put off by the importance of ego in art school, and the idea of mingling with a hundred kids who all saw themselves as the next Picasso…” Enthusiasm still rings in Lindman’s voice: “I took amazing art history classes with Rosalind Krauss, anthropology classes with Michael T. Taussig, a brilliant teacher, and I also learned from painter Blake Rayne, who had a more theoretical than technical vision. Columbia made me fluent in the language, allowed me to find the right words to formulate complex ideas about painting.” But, he adds, “I learned absolutely nothing about technique! In that respect, I am entirely self-taught…”

Obviously, Columbia’s teachings were fruitful: in 2011, he published an essay, On Painting. To get a better idea of how accurate his pictorial descriptions are, you should read the supporting notes for his Fal/Parsi exhibition at Peter Blum’s, New York City, in 2020. He wrote, but also read: Jung, Simone Weil… Then a swing of the pendulum: Erik Lindman quickly returned to painting, in the place where it is most concrete—the studio. This is where “interest in ideas outside the field of art is reflected in the way materials are put together, in certain attitudes. Painting is very easily influenced!”

While we’re on the subject of influences, Erik Lindman’s painting is imbued with a whole galaxy of references: Percival (hence Fal/Parsi, but also, more obviously, his Parsifal exhibition in late 2019), Peder Balke… and isn’t that Malevich slipping his square into “UnBtled”, a canvas aptly subtitled (Grey Square)? “When I reference other works, I’m not trying to give my paintings more importance; rather, I’m confronting them with something greater.” I allow myself a moment to pontificate: “found surfaces”, the use of exogenous materials… are they not a nod to the avant-garde of the 20th century, to collages and so on? “You can go back even further: why always look for references among the modernists? Using and reusing materials was already popular in the caves at Lascaux!” But the Columbia alumnus won’t stop at a clever joke: “You could argue that I am resorting to outdated gestures that are no longer new. Sure, but I would argue back: why do they still make sense? There’s nothing ironic about me. I’m aware of the history, but when I’m in the studio, the history vanishes. All that’s lek is the excitement of creation.”

The excitement didn’t go unnoticed, and Lindman was spotted by no less than Norman Rosenthal himself: “In 2010, I took part in a group show in London, at Hannah Barry’s. There, I met Norman Rosenthal, who bought one of my paintings – which still hangs in his home in London, above his bed! It was the first painting I ever sold…” But before his work gets to adorn the walls of great art historians, he has to get his hands in the dirt, or rather the surface. Why “found surfaces”? What criteria apply to their choice? “I just feel I need them, it’s not really a choice. Some things catch my eye, others simply don’t.” There’s nothing theoretical about it: “I’m not interested in the dialogue between ‘high’ and ‘low’.” His latest works focus on epoxy and canvas collages, and he seems to have moved away from his “formal surfaces”. For good? “Never say never,” Lindman replies, and uses an anatomical simile: the artist needed to exert a different muscle. Likewise, he has dabbled in sculpture, first as an inspiration – in 2016, the canvases in his Torso exhibition kicked off with Rodin’s The Walking Man—then in earnest, in 2019.

The interplay of hand and thought, of substance and spirit, is equally at work in the paintings and in the painter himself. I discuss his 2017 exhibition at Almine Rech New York, where the middle of his canvases appeared to be occupied by large panels. “There, the color was inside, in an in-between, partly behind wood or metal. A form of interiority is expressed in painting, something you perceive intuitively, but which is also highly tangible – hence the colors appearing in the ‘found surfaces’, or around them. To me, these paintings are closely linked to the body. When standing in front of them, all the more so as they are vertical, there is something like a bodily confrontation, through which empathy is possible. Don’t get me wrong: I’m not saying painting has a soul, but I do think there is a form of communication in the face-off.”